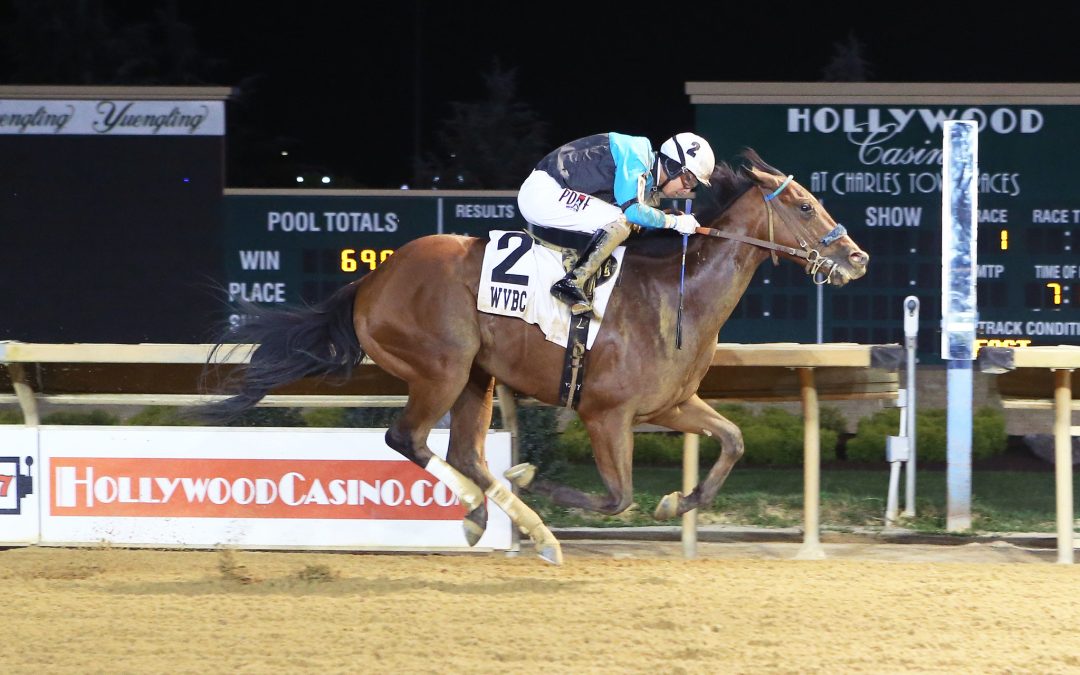 David Raim was all smiles following a win in one of Saturday’s West Virginia Breeders’ Classics races.

It was a remarkable moment, not for what Raim, a longtime owner, said, nor for what he’d already accomplished, but for what was still to come.

Raim, you see, had declared WVBC his “number one” racing day after the running of the Triple Crown Nutrition Breeders’ Classic for two-year-old fillies. That was just the second race on the card; there were seven still to come, and as it turned out, Raim would win three more, including the Classic itself.

Bocachica, who has 190 wins at the track, more than twice as many as any other rider, won aboard all seven of Runco’s winners, plus Door Buster, the Ollie Figgins, III trainee who took the WV Tourism Office Breeders’ Classic for three-year-old fillies.

“It feels amazing, man, the best feeling ever,” Bocachica said. “Winning one is a good feeling. Now you win seven times: it’s a great, great feeling.”

Boca had mounts in all nine races, also finishing fourth aboard the Runco-trained Aaron’s Tap in the 4 ½-furlong Dash for Cash won by Hypothesis for trainer Crystal Pickett.

Raim’s five wins came with the only five horses he entered.

Runco’s runners, meanwhile, came in waves. He sent out 16 all told, winning with seven. He also added a second-place finish and three thirds.

In addition to the Raim runners, Runco also saddled WV Lottery winner Social Chic for Smart Angle LLP and Cavada champ Star of Night for Huntertown Farm LLC. Runco sent out six favorites, all of whom won on a night when the chalk won eight of nine races.

Two of those wins — with Penguin Power in the Onion Juice and Star of Night in the Cavada — came with runners breaking from the 10-hole, the farthest outside post on Charles Town’s bullring track.

“Favorites lose all the time,” Runco said with a bemused laugh. “All the time — especially when you have the 10-hole.”

Some of the wins were no great surprise, of course. Star of Night was off at 1-9 in the Cavada, with her main challenge overcoming the 10-hole. Muad’dib was 4-5 in the Classic and, if he’d ever tried nine furlongs before, would have been shorter than that. And Run to Daylight, 3-5 in the Vincent Moscarelli Memorial, was the only one of the six juveniles already in possession of a stakes win.

On the other hand, runners like The Sky Is Falling (9-1 in the Triple Crown Nutrition) and even Penguin Power — despite getting bet down to 3-10 in the Onion Juice — appeared vulnerable. They weren’t.

It was The Sky Is Falling’s first try around two turns and first with blinkers on.

“Jeff expected this; I didn’t,” Raim acknowledged. “Jeff had been telling Susan [Runco’s wife] and me all week that this horse looked great and just was not a 4 ½-furlong horse and that he thought she had a real shot. So it didn’t surprise Jeff that much.”

Four races later, Penguin Power and Boca went straight to the front and never looked back en route to a three-length win that made him only the second runner to win the same WVBC race in three consecutive years. Not for Sam won the Dash for Cash in 2004, 2005, and 2006.

It was also a bit of redemption for a six-year-old who hadn’t won in the year since his most recent Onion Juice triumph and whose starts this year had resulted in seventh-, sixth-, and fourth-place finishes. In each of the last two, he’d gone to the lead early but faded late.

And yet, the win… Well, just say it’s not how they drew it up.

“He wasn’t supposed to get the lead,” Raim said afterwards. “Jeff was happy with the 10-post — really happy because he said if they get out fast, he’s not going to get cooked. He can stay outside.”

Instead, Penguin Power, a gelding by Fiber Sonde, led by two lengths after the opening quarter-mile and never saw his advantage shrink much thereafter.

“I guess he just got a good start, and the fractions weren’t too bad,” Raim said.

All in all, what’s the recipe for a huge day? Bring good horses in good form. Put the best rider on them. And catch some breaks.

“We had confidence coming in, but you never know with horse racing,” Runco said with still two races to go. “You can come in on a night like this with a lot of favorites, and you can come out with a lot of seconds and thirds. So we just hope that things are going our way, and it has so far. We’ve had some great trips. It’s worked out great.”