Fancy Her Up flashes major talent 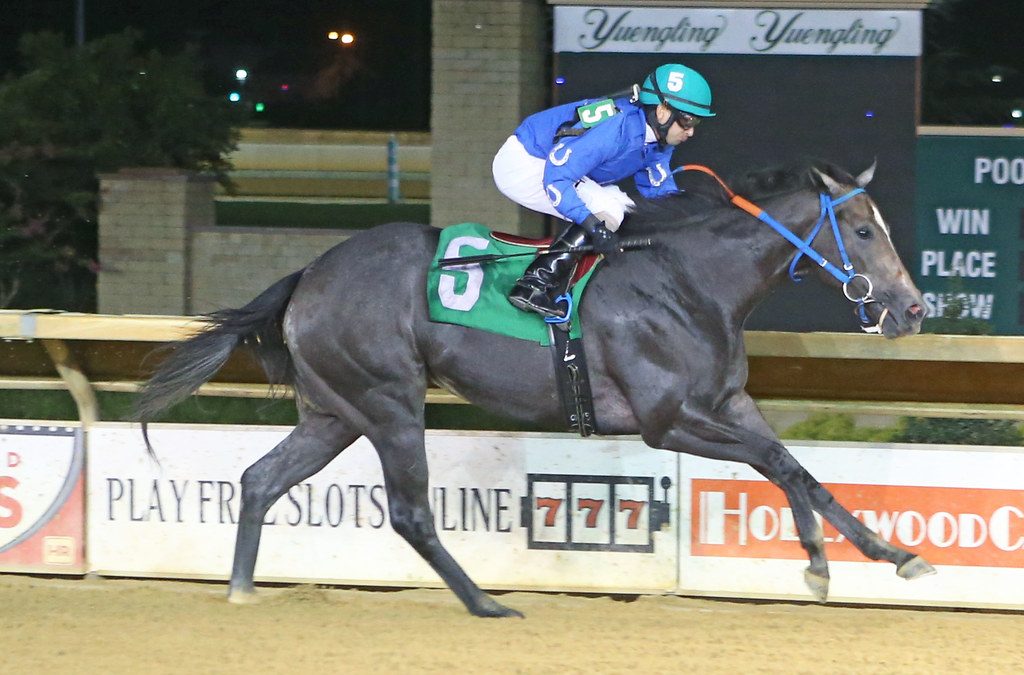 Fancy Her Up. Photo by Coady Photography.

On September 18, when a waxing gibbous moon offered a scenic backdrop to the racing card on a crystal clear evening, Charles Town presented a trio of one-turn stakes races that may have helped provide a little more clarity for the upcoming West Virginia Breeders Classics card here in three weeks.

Perhaps appropriately, given the astronomical situation, a local star may have been born.

In the $75,000 Rachel’s Turn Stakes for state-bred two-year-old fillies, Fancy Her Up, with Gerald Almodovar in the irons, regained her winning ways when she darted to command soon after the break and cruised home in the lane to a five-length score while stopping the timer in 51.60 as the 4-5 favorite.

That time was easily faster than the boys managed it one race prior and virtually identical to that recorded by older runners one race later.

Fancy Her Up is a juvenile daughter of Juba out of a Smoke Glacken mare. John A. Casey bred, owns, and trains her, Fancy Her Up recorded her second win from three starts and rebounded from a subpar outing on the turf at Colonial Downs in her previous try.

“She’s always been really fast and today she was on her game right from the start,” Casey said. “I really don’t know what happened at Colonial. She didn’t get a great start and then she rushed up on the turn and then flattened out. But she broke good tonight and Gerald rode her out a little past the wire. I think she’s got enough natural early speed to get the lead and then go 6 1/2 [furlongs in the West Virginia Triple Crown Nutrition] Breeders’ Classics.”

“She’s really quick away from the gate and I knew once she made the turn on the lead they weren’t going to go by her,” Almodovar said. “I rode her out past the wire because she’s going to stretch out next start. I think she’ll get the distance. She’s fast, but I think she’ll go further next time out – no problem.”

In the first of the trio of stakes contested at the 4 1/2-furlong distance, the Henry Mercer Memorial for state-bred juveniles, Run to Daylight, with Arnaldo Bocachica up, easily lived up to his role as the 1-2 favorite. Run to Daylight gained command soon after the break from his outside post in the compact field of five runners and drew clear in the lane from Roll Dem Bones to a 5 3/4-length score.

A juvenile son of Runhappy trained by Jeff Runco for owner David Raim, Run to Daylight remained perfect in two career starts by getting the 4 1/2-furlongs in 52.41 and gave his connections confidence that he could stretch his speed the two-turn distance of 6 1/2-furlongs that will be required to capture the $75,000 Vincent Moscarelli Breeders Classic here on October 9.

“When I hit him with the whip, he changed leads right away and really took off,” Bocachica said. “He’s got a lot of talent. Having the outside here really helped. When he broke that well I knew he was going to be tough to beat. I don’t think he will have any trouble with the 6 1/2 [furlongs]. He really finished out well.”

“I’ve liked him from the first time that I saw him on [breeder James Miller’s] farm,” Runco said. “We thought about buying him, but we thought the price was a little high. He sold for $115,000 at the weanling sale, then they put him back in the yearling sale and we got him for $60,000. I think we might have gone as high as $80,000 for him. We’ve done that in the past. But I thought David got a really good horse for a good price.”

In the last of the trio of stakes, the $40,000 Last Enchantment for three-year-olds and up competing at the one-turn dash distance, Hypothesis (Jose Montano) rallied from just off the pace, overhauled favored sophomore Golden Key at the top of the lane then outlasted the late surge of 23-1 outsider Command The Cat for a length score in 51.56.

It was an emotional victory for trainer Crystal Pickett, who is hopeful the Algorithms gelding can post one more score in three weeks’ time. Hypothesis already has one WVBC score to his credit, having won the 2019 Moscarelli Memorial in his juvenile season.

Another WVBC win would draw Hypothesis even with his late stablemate, Dr. Feelgood. Dr. Feelgood, who was virtually invincible at the local one-turn distance, won the 4 ½-furlong WVBC Dash for Cash in both 2019 and 2020.

“He’s always really done well here going 4 1/2-furlongs, but it all depends on the trip,” Pickett said of Hypothesis, who notched his third win from eight starts this year and now owns a 9-5-1 slate and over $275,000 banked from 21 career tries. “He had such a tough trip in his last start. He just never got any room. He’s the first foal out of that mare [Ideal Thoughts] and he’s so much like his mother. I hope he can come back here next month and win the [West Virginia] Dash [For Cash] like his stablemate, Dr. Feelgood did last year. I still can’t believe he’s gone. With him going 4 1/2 I never had any worries with him.”