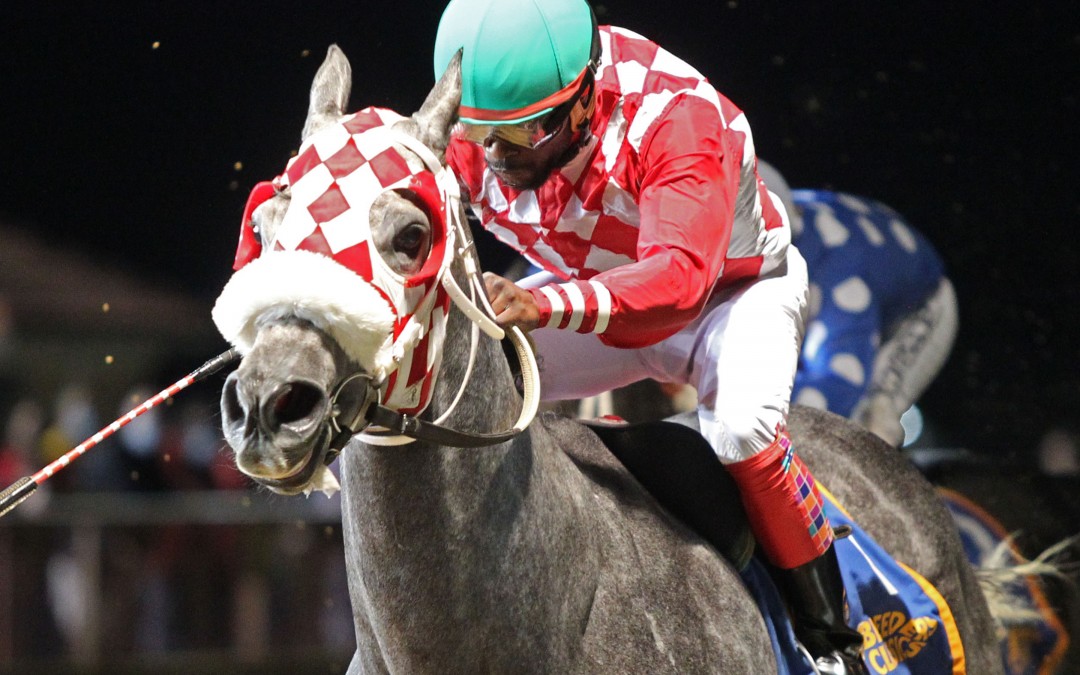 Dr. Feelgood is by Fiber Sonde. Photo by Coady Photography.

McKee won races on the card as an owner, trainer, and breeder. And Fiber Sonde, the stallion he stands, sired five winners on the card. All told McKee had a winning hand in five of the nine stakes on the card.

“He’s certainly been a blessing for us,” McKee said of Fiber Sonde. “I probably could have charged more for him, but I like to keep his book full and $1,000 just seems fair. He’s had horses win early and win as older horses. They’ve won sprints and they’ve won going long. It was a big night. Anytime you can win one of those races on the big night up here you feel grateful. But I won two and Fiber Sonde won three others for me, so I’m happy with that.”

Just before the midway portion of the card, Youthinkthatsfunny (Reshawn Latchman) forged a mild 3-1 upset in the $70,000 Vincent Moscarelli Memorial for state-bred two-year-olds. A juvenile son of Fiber Sonde owned, bred and trained by McKee, Youthinkthatsfunny surged to command down the backside and then outkicked Pilot In Command and Officer Appeal for a three-length score while stopping the timer in 1:21.42 for the 6 1/2-furlongs in his first try around two turns.

“He was able to work out a great trip and it looked like the favorite [Hopping Henry] had all kinds of trouble on the clubhouse turn,” McKee said. “I’m not really sure what happened to him. But my horse came into it great. You never know how they’re going to do racing two turns for the first time. He acted like he wanted to get a little more distance. He’s got plenty of ability, but you never know until you try two turns for the first time what they can do.”

Then one race later in the $70,000 Triple Crown Nutrition Stakes for state-bred two-year-old fillies, Shutupn’kissme (Wesley Ho) led through most the race before settling for second as 2-1 second choice That Kenney Kid (Arnaldo Bocachica) nailed her in the final 100 yards. Shutupn’kissme was best of three McKee homebreds in the Triple Crown Nutrition, finishing a game second in her first try going two turns. She had suffered a troubled trip in the Rachel’s Turn when second to stablemate Theladyistrue, who was third in a good effort on Saturday night.

“I was happy with the way both of my fillies ran in there,” McKee said. “Shutupn’kissme had all kinds of trouble in the Rachel’s Turn and still got second when my other filly won it. Tonight Wesley was able to get her away from there cleanly and she led the way most of the way before just getting caught by Jeff’s filly. I thought my other one ran okay in there.”

McKee is also the trainer and owner of Bridging the Gap, who dominated the evening’s top race for older distaffers, the $100,000 Cavada. In 2019 Bridging the Gap had suffered a case of the feed-borne disease EPM so severe that one vet recommended McKee put the horse down.

“This filly came a long ways back from the EPM last year,” McKee said after the Cavada. “It means a lot to see her win that type of race.”

McKee was also the breeder of Penguin Power, who easily defended his title in the Onion Juice as the 1-5 favorite. Penguin Power, trained by Jeff Runco for owner David Raim, stopped the timer in a sharp 1:24.09 for seven furlongs while winning by over 14 lengths. Arnaldo Bocachica was in the irons — one of three races he won on the evening while aboard horses trained by Runco.

In addition to Youthinkthatsfunny, Penguin Power, and Bridging the Gap, two other runners by Fiber Sonde bookended the card.

In the opening race on the card, the $70,000 West Virginia Dash for Cash for state-bred three-year-olds and up contesting the one-turn sprint distance of 4 1/2 furlongs, Dr. Feelgood and Sagebrush ran one-two. While McKee was not listed as owner, trainer of breeder of either runner, his prominent sire, Fiber Sonde, could boast a one-two finish in the stake.

Dr. Feelgood lived up to his role as the 1-9 choice for trainer Crystal Pickett and defended his title in the Dash by two lengths in 50.91 seconds. He remained perfect from five starts on the season and in 10 career starts at the trip.. McKee also sent out homebred Command the Cat to a third-place finish in the WV Dash For Cash, giving him a sweep of the top three spots.

“Sitting on him is like driving a Cadillac,” said Dr. Feelgood’s regular pilot, Darius Thorpe. “You just never have an anxious moment.”

In the finale, the seven-furlong, $70,000 West Virginia Lottery for three-year-olds, Fancy Concho (Christian Hiraldo) led throughout as the 3-1 third choice to give Fiber Sonde his fifth winner on the card. It was a hint of redemption for trainer Tim Grams, who watched Runnin’toluvya fade as the odds-on choice in the final quarter mile of the featured $150,000 Classic. Fancy Concho had defeated allowance foes one week earlier and stepped up to capture his first stakes win for Grams.