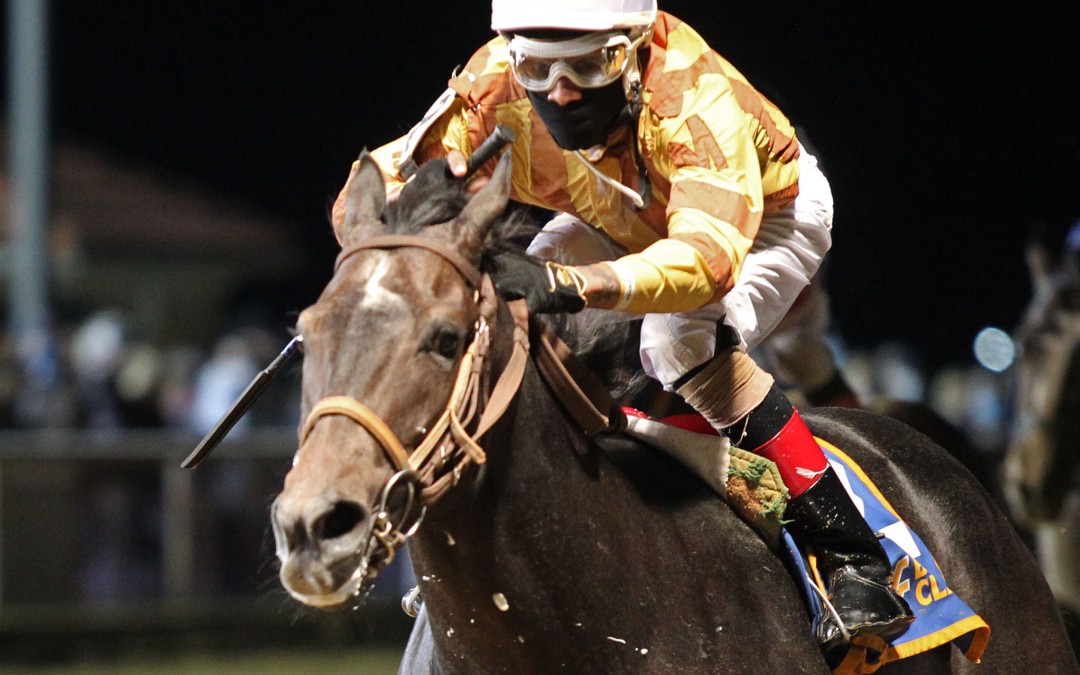 Photo of Youthinkthatsfunny by Coady Photography.

In consecutive races during the middle stages of the West Virginia Breeders Classics card on Saturday night, onlookers had a chance to glimpse the future when Charles Town hosted the $70,000 Vincent Moscarelli Memorial for two-year-olds and the Triple Crown Nutrition Stakes for two-year-old fillies in what would be the first attempt around two turns for most of the combatants.

Heading into the Vincent Moscarelli Memorial for the boys, much of the attention was focused on Hopping Henry (Wesley Ho) the gray son of Juba owned, bred and trained by Michael Sterling who had prepped by taking the $50,000 Henry Mercer Memorial Stakes last month. With the addition of blinkers for the first time, Hopping Henry was made the even-money choice in the Moscarelli but he was felled by a rough trip and a familiar foe while well beaten in sixth.

Soon after the gates opened in the Vincent Moscarelli Memorial, Uncle Funky and Youthinkthatsfunny both broke alertly while Hopping Henry was steadied behind them in tight quarters and never was able to settle down. Pilot in Command, third as the favorite in the Mercer, got away fourth and launched his bid down the backside and through the far turn but by then Youthinkthatsfunny had surged to command and the McKee homebred son of Fiber Sonde held safe the wide, late bid of Officer Appeal to score by three lengths in 1:21.42 as the 3-1 third choice.

“My horse has a lot of speed and I just wanted to get away from there and stay out of trouble,” Latchman said. “I was looking for [Hopping Henry] but I never saw him. When [Pilot in Command] come to me on the far turn, I knew I still had plenty of horse. He opened up on them turning for home and he felt good in the lane. I never saw [Officer Appeal] but I wasn’t worried. This horse has a lot of ability.”

McKee, who watched the entire card from his home at Beau Ridge Farm, was thrilled to see Youthinkthatsfunny notch his first stakes triumph and his second win from four starts overall, doubling his career earnings past $60,000. Youthinkthatsfunny had engaged in a spirited duel with Hopping Henry in their respective career debuts back on July 4, both of them defeated by the late run of Natural Attraction, but he came back to graduate by five lengths on July 25 before running second to Hopping Henry in the Mercer.

“He was a little unlucky in that first start,” McKee said. “He showed speed, but he just got tired at the end. He was really good his second start and I thought he ran good in the Mercer. Tonight he was able to work out a really good trip. It looked like Hopping Henry had all sorts of trouble on the clubhouse turn. He just never really fired. But my colt was really good. You never know how they’re going to handle two turns, but he seemed to like it okay.”

One race later in the Triple Crown Nutrition for the fillies, That Kenney Kid (Arnaldo Bocachica) rebounded from a fourth-place finish as the odds-on favorite in the Rachel’s Turn Stakes last out to overtake another McKee homebred trainee, Shutupn’kissme (Wesley Ho) in the final 100 yards. A juvenile daughter of Speightster trained by Jeff Runco for owners David Kenney and ERJ Racing (Eric Johnson), That Kenney Kid benefited from the addition of blinkers for the first time to notch her first stakes tally and second win in four outings by getting the 6 1/2-fulongs in 1:21.33.

Yet another McKee runner, Lock Down Time, went off the 9-5 favorite but was never much involved and finished seventh.

“Really, the biggest change was the addition of blinkers,” Runco said. “She was looking around in that last race and never really settled down. Tonight she was focused and able to work out a good trip. I wasn’t sure at the quarter pole. It looked like John’s filly had gotten away from her. But she just seemed to find another gear in the lane.”

“Tonight she was a lot more focused,” Bocachica said. “She broke sharp and I was able to get her to settle down into a good spot. That other filly looked like she might get away from us before the eighth pole. But my filly kicked in again the last sixteenth. That filly on the lead wasn’t coming back to us. She had to go and get her.”