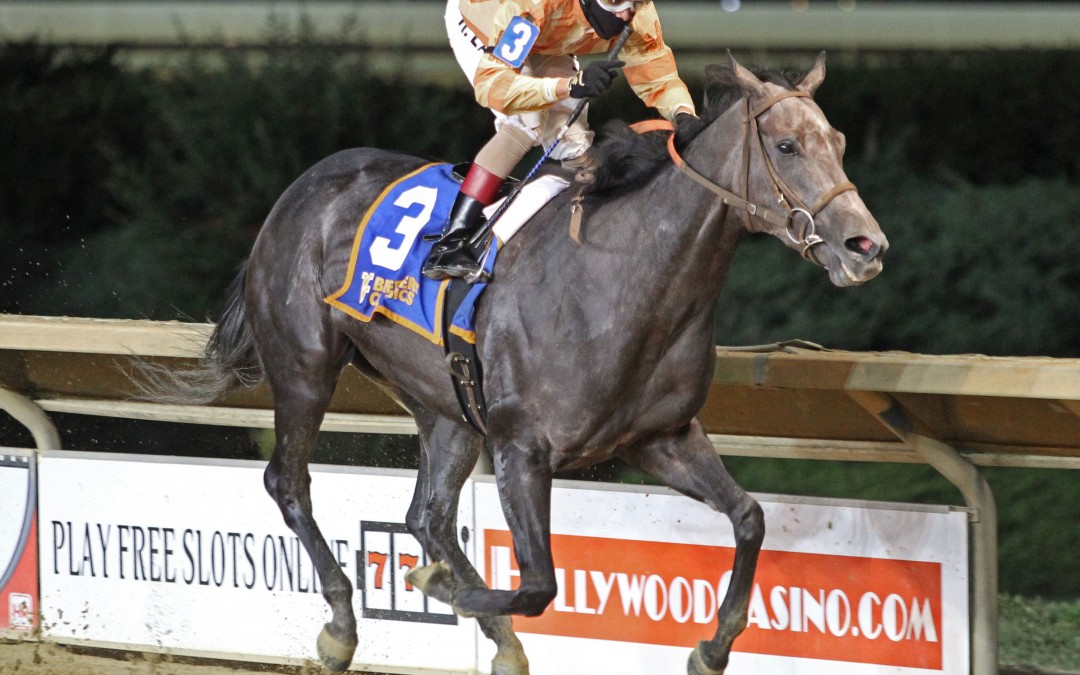 Bridging the Gap wanted no part of the starting gate tonight before the $100,000 West Virginia Cavada Breeders Classic. She shook her head, shimmied in place, then reared up. Jockey Reshawn Latchman popped off, and for a moment, it appeared a storm could be brewing.

But Bridging the Gap settled, Latchman re-mounted, and the duo proceeded to lay waste to their rivals en route to a 6 1/4-length victory.

“She was a little fractious in the gate, but she really wanted to run,” Latchman said. “Once she settled, she broke and then I knew she was good.”

When the gates opened, Bridging the Gap was away quickest and showed the way. She set down solid early fractions – 23.55 seconds for the quarter-mile, 47.72 for the half – but was doing it well within herself.

In the lane, Bridging the Gap opened up powerfully and cruised home to win by six lengths in 1:25.67 for seven furlongs on a fast main track. Lady Storm chased her from second all the way around to no avail but did hold the place spot, three lengths ahead of Sherwood Lady in third.

“I didn’t really start asking her until the quarter pole,” Latchman said. “Then she just took off.”

Bridging the Gap earned her second consecutive stakes win and fourth win in a row overall. She now has eight wins from 13 career starts, and the winner’s share of the $100,000 Cavada pushed her earnings to just a bit shy of $200,000.

Which is a pretty nice resume for a filly who lost months of racing to EPM.

“This filly came a long ways back from the EPM last year,” said John McKee, the winning owner-trainer. “It means a lot to see her win that type of race.”

The win was McKee’s second on the evening and 17th in WVBC competition. He had previously won the Cavada in 1992 with Rachel’s Turn.

It also continued yet another remarkable evening for Bridging the Gap’s sire Fiber Sonde, the stallion McKee stands – for $1,000 — at his Beau Ridge Farm. Fiber Sonde offspring won four of the first seven races on the evening, McKee the breeder of two of them, though Bridging the Gap was bred by the late Don E. Cain.

The only concern McKee had after the race: what to do next with her?

“She’s doing really well, and I hate to stop with a horse doing that good,” he said. “I’m not sure what she’ll do next. I might try her once at Laurel in one of those stakes. She’s been on a nice roll here since the middle of the summer.”