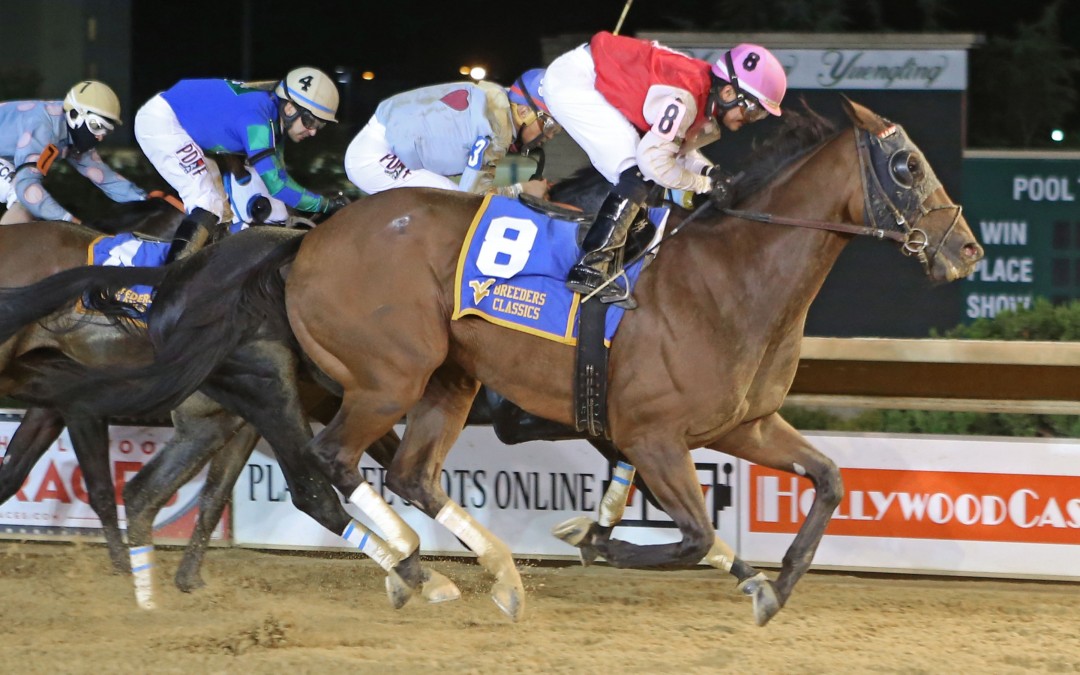 Heading into the 34th edition of the $150,000 West Virginia Breeders Classic for state-bred three-year-olds and up traveling the three-turn distance of one-mile and one-eighth, most of the attention was right focused on post time favorite Runnin’toluvya.

He’d already eclipsed the $1 million plateau in career earnings for trainer Tim Grams this year, but it had been an uneven campaign, Which Runnin’toluvuya would show up – the one that won this event by 10 lengths two years ago or the one that reared up in the gate and finished last year in his title defense?

Having won the $50,000 Frank Gall Memorial last out and finished third in the Grade II, $600,000 Charles Town Classic one race prior to that, Runnin’toluvya was made the 2-5 the favorite in his third attempt at ‘Classic’ success. Only North Atlantic, the durable Jeff Runco trainee who was making his fourth start in the Classic, garnered much support as the 7-2 second choice. But neither would have the answers, and the ‘Classic’ produced its second straight shocker.

Soon after the gates opened in the Classic, longshots Hero’s Man and Opera Nite both broke well to vie for command with Runnin’toluvya and North Atlantic sitting just off the leaders. The pace was quick early with Hero’s Man setting splits of 23.40, 47.14 and 1:12.76 for the first three calls. Runnin’toluvya and North Atlantic appeared to be sitting in ideal stalking spots to settle the issue later in a formful finish. But that’s certainly not how things unfolded in the lane.

At the top of the lane, Runnin’toluvya had begun to fade while North Atlantic was only advancing gradually. The late closers began to make their presence known and Awsome Faith, with Antonio Lopez in the irons, finished best of all for a 37-1 shocker, edging 17-1 Buff’s Eye View for a half-length score in 1:54.27 for the nine furlongs. North Atlantic finished third, while Hero’s Man settled for fourth after setting the early tempo.

Runnin’toluvya faded to sixth between horses in a puzzling effort.

A seven-year-old Friesan Fire gelding owned and trained by Jeff “Scott” Allen, Awsome Faith notched his first win in five starts this year and now owns a 10-13-10 slate and earnings of just over $310,000 from 52 career outings. Both Awsome Faith and Allen had competed in relative obscurity over the years, and this victory gave the owner-trainer his first triumph on WVBC night ever.

“Going into this race I really was hoping to be third or fourth,” said Allen, who got his trainer’s license in 1999 after working for Jeff Runco, David Walters, and several others on the backstretch. “Even when they went the first part of it, he was so far back, I thought he would be third at best. But the pace was pretty honest and those horses started to tire a little bit. I thought Antonio might be able to find a seam along the rail, but he got to the outside and kept going. Then he finished up great. I just can’t believe it.”

Lopez noted he was just looking for the speed horses to begin to tire before launching his bid and by the quarter-pole, with Runnin’toluvya clearly not hitting on all cylanders, the veteran rider knew that his chances for hitting the board were about to improve dramatically.

“I knew there was lot of speed in this race, so I just wanted to settle,” Lopez said. “I started passing horses down the backside and I had a pretty clear run at them. I could see the other horses coming back to me at the eighth pole and I knew I had a chance. When he straightened away, he just kicked on. I thought it was between me and [Buff’s Eye View] in the lane and my horse just kept going.”

Runner-up Buff’s Eye View is trained by one of his former bosses, David Walters, and both had prepped by working five furlongs on September 29. North Atlantic has been second twice and now third two additional times in the Classic. Last year’s longshot winner, Castle Bound, who was a 68-1 shocker in 2019, was 64-1 today and ran like it, finishing seventh while never a threat.

Runnin’toluvya disappointed for the second straight year, with Grams realizing his chances were lost before the gates opened.