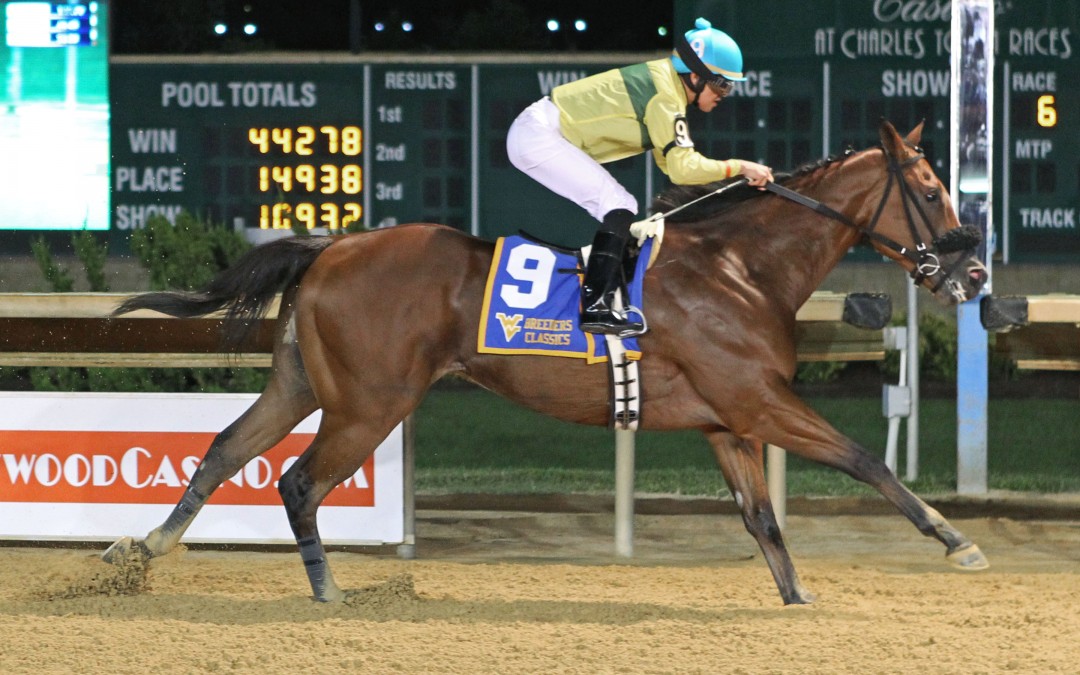 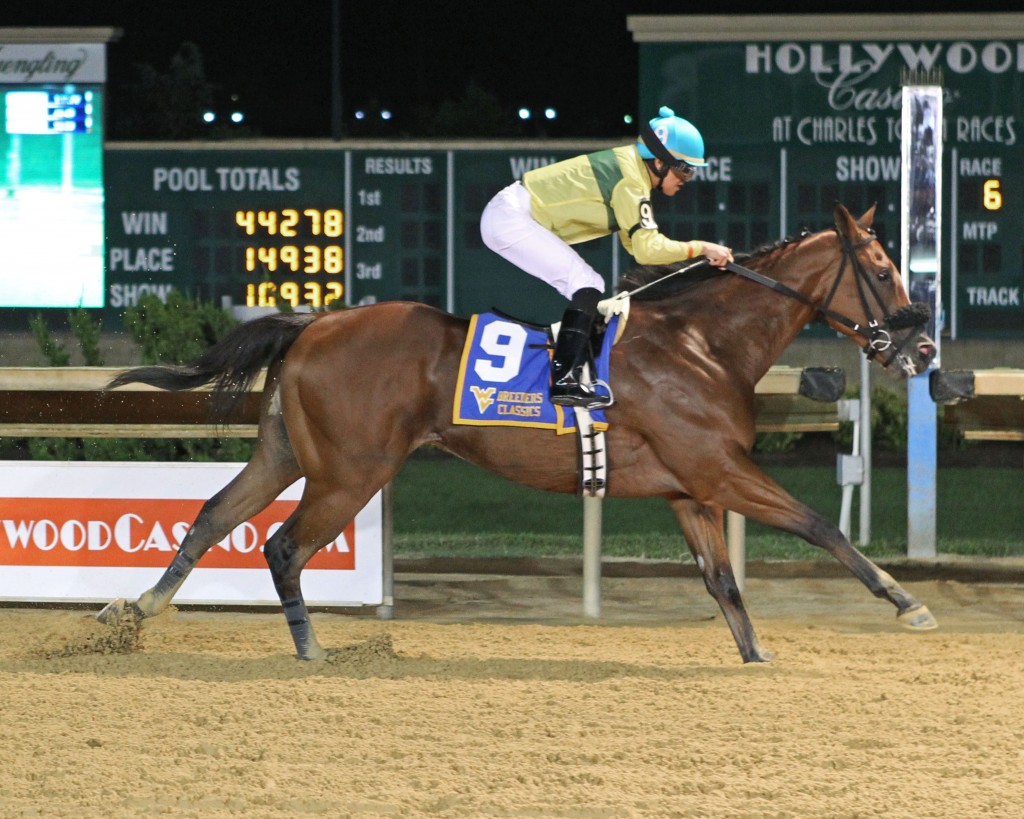 While there was an equal mix of successful favorites and stunning upsets on the 31st edition of the West Virginia Breeders Classics at Charles Town on Saturday night, three of the winners on the card enhanced their resumes by establishing new stakes records for their respective events and perhaps gave an indication there could be more major success to come.

Throughout the year, Moonlit Song (Christian Hiraldo) has been the dominant state-bred three-year-old filly, and Saturday night she capped her sophomore campaign by capturing the $125,000 Cavada Breeders Classic by three lengths in 1:25.83, establishing a new stakes record for the featured event for fillies and mares. A Fiber Sonde filly owned, bred and trained by Tim Grams, Moonlit Song ended her season with three straight stakes scores and eight wins from 10 starts overall and banked nearly $250,000.

“Everything she did this year just impressed me,” Grams said. “She was really good from the start of the season all the way to the end. My other good filly, Fancy Buckles, was really good, too. She came close to winning the Cavada a couple of times. But this filly has another gear that Fancy Buckles didn’t have. She’s a big, strong filly and she just does it so easily. Tonight she didn’t want to change leads but she usually finds another gear. Now she’s going to get some time off and probably bring her back in March.”

Hiraldo has been the regular pilot of Moonlit Song throughout the season, guiding her to five stakes victories, three against older rivals. On Saturday night in the Cavada, Moonlit Song had to face pressure from Boppin Rocket through the first turn and down the backside briefly before shaking loose from that rival and then outlasting the late bid of T Rex Express to win by over two lengths. Despite facing early pressure and not changing over to her right lead through the lane, Moonlit Song established a new stakes record in the Cavada on Saturday and continues to impress Hiraldo.

“I knew that other horse was going to provide a little pressure because she’s been racing in those 4 1/2-furlong races,” Hiraldo said. “Before the race Tim told me if that other filly wanted the lead then just let her go. But my filly felt pretty good. She was going pretty easily and then when I turned her loose she still had a lot left. She didn’t change leads in the lane, but she was still looking for that filly outside of her. She had a really good year and hopefully she’ll come back bigger and stronger next year.”

One race later on the card Hiraldo was back in the winner’s circle after capturing his second of three stakes on the night, this time by guiding Bound to Windsor to a two-length score over the previously undefeated Noblame to prevail in the $75,000 West Virginia Triple Crown Nutrition Stakes in 1:19.85 for the 6 1/2-furlongs, shattering the previous stakes record by more than a full second. This was only the third year the race has been contested at the two-turn distance.

“In her first start she stumbled at the break and then circled the field five-wide,” Hiraldo said of Bound to Windsor, a homebred daughter of Windsor Castle owned, bred and trained by James W. Casey. “Then in her second start, I used her early she didn’t like that and got tired late. So tonight I just let her settle early and took her back. I let her run a little bit down the backside. I knew [Noblame] was the horse to beat. I could see she was starting to get a little tired on the far turn and my filly was going pretty good at that point and I knew we had her.”

Casey has been high on Bound to Windsor since the outset of her career and now expects the homebred daughter of Windsor Castle to continue to improve over the next two months into her last trio of stakes that includes the West Virginia Futurity, Tri-State Futurity and the Eleanor Casey Memorial all at the two-turn distance of seven furlongs.

“She’s been working in company with my good two-year-old colt, William and Mary,” Casey said. “Their last couple of workouts were all at five furlongs and they’ve been doing really good. The further they go, the better they’re both going to be. I was disappointed with this filly the last time she ran. The first time she ran she went to her knees at the break and then circled the field. Nothing went her way that first start and she still won. I think she’ll continue to keep getting better.”

Then just past the midway point of the card, Grumpelstiltskin (Jose Montano) perhaps delivered the most impressive performance of the night when he captured the $75,000 West Virginia Lottery Breeders Classic by six lengths in 1:25.25, equaling the stakes record for the event set two years ago by the late Slip The Cable, the 2016 Classic hero for trainer Jeff Runco. A sophomore son of Successful Appeal trained by Jeremiah Englehart for owner August Dawn Stable, Grumpelstiltskin triumphed easily in his local debut and now owns two wins and nearly $100,000 banked from five lifetime outings.

Grumpelstiltskin is out of the multiple stakes winning Luftikus mare Shesagrumptoo, who is a half-sister to the multi-millionaire Russell Road.

“I remember this colt when he was foaled,” said breeder Randy Funkhouser of O’Sullivan Farms. “He went for $50,000 at the Fasig-Tipton sale at Timonium and he’s raced some really good horses in those allowance races at Belmont Park and Saratoga. We have his full-brother (Bubba Grump) at the farm and he looks really good. We may end up keeping him. Rodney Jenkins, who bought Golden Years from us a few years ago, has inquired about buying his full-brother, so we’ll see what type of offer he makes.”

NOTES All-sources handle for Saturday’s West Virginia Breeders Classics was also a record for the event, totaling $2,191,658, including over $150,000 wagered on track. That was up just about 25 percent versus WVBC 2016 handle.

“The West Virginia Breeders’ Classics has been around for thirty years now, and to break the previous wagering mark by 25 percent says so much about not only the team here, but also the state of where the program is in terms of its popularity and brand,” said Charles Town’s vice president of racing operations Erich Zimny. “Handle per race in 2017 is on pace to be up significantly over a record year we had in 2016, and the figure up to this point in 2017 puts us 65 percent ahead of where we were just 8 years ago. It’s been a great job by everyone involved.”

This story originally on The Racing Biz.