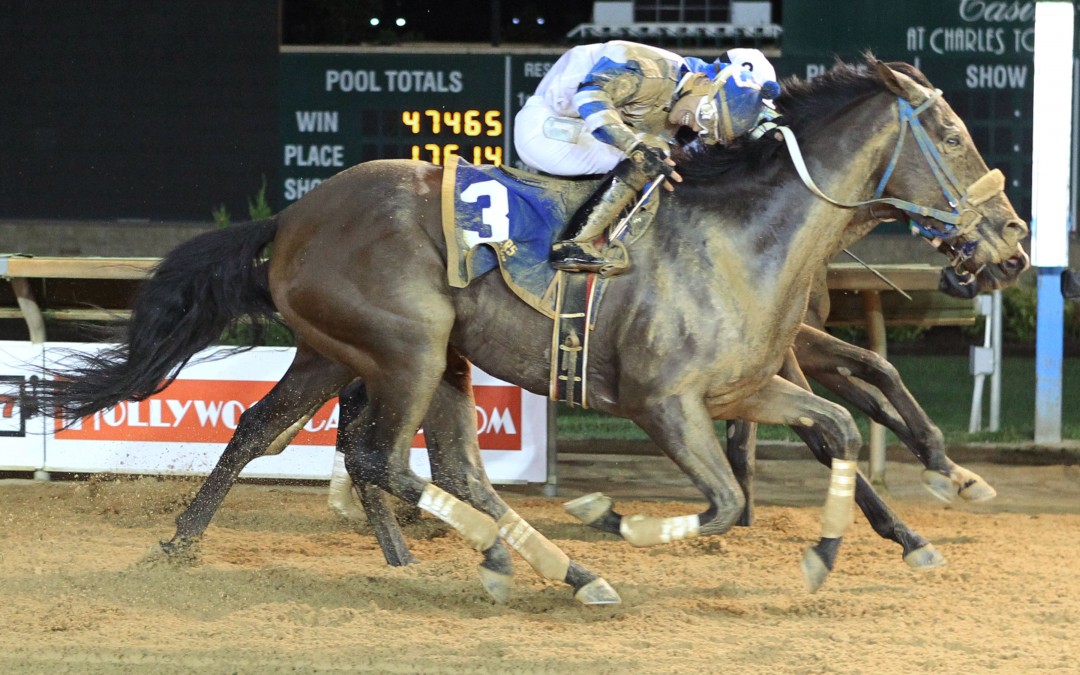 On a night when the focus at Charles Town was on the state-bred runners of all ages and both genders for the 31st edition of the West Virginia Breeders Classics, jockey Christian Hiraldo was the undisputed human star. He recorded three victories on the card and prevailed in the evening’s top two races, the $350,000 Classic aboard Charitable Annuity and the $125,000 Cavada on Moonlit Song.

Hiraldo completed his stakes “hat trick” in stellar fashion when he steered Charitable Annuity to a narrow victory over Jeff Runco trainees North Atlantic and Weekend Liberty to capture the featured $350,000 West Virginia Breeders Classic by a nose in 1:53.37 for the nine furlongs.

It was the second win for Charitable Annuity in the Classic, having prevailed in the 2015 edition before finishing second to the late Slip The Cable in his title defense last fall. Hiraldo inherited the mount when regular rider Antonio Lopez was injured in a spill nearly two weeks ago.

“I knew the race had plenty of speed, so I thought I would sit just off the cheap speed and wait until the three-eighths pole to make my move,” Hiraldo said. “This horse has always liked going this distance while the other horses were all coming out of sprints, so I knew if I was patient I could get them in the lane. That last 100 yards was really tight. I asked my horse turning for home and he seemed to have another gear and it got tight at the wire, but I knew that I had it. Winning three races is always good and winning three stakes is even better.”

Charitable Annuity, who had struggled for much of the season, now has 15 wins and nearly $850,000 in earnings from 28 career starts.

Hiraldo actually kicked off the card by getting beat aboard 8-5 favorite Greenway Court in the $65,000 West Virginia Dash For Cash as that James W. Casey trained homebred was seeking his third straight tally in that event and fourth overall. But after getting beat aboard one favorite, Hiraldo promptly climbed aboard another and steered Moonlit Song to a sharp score in the $125,000 Cavada in 1:25.83 to establish a new stakes record for that seven-furlong event.

“She was really good again tonight and my only concern was getting the front before we hit the first turn,” Hiraldo said. “I knew that other horse (Boppin Rocket) was going to come to me because she’s been running in those 4 1/2-furlong races here and she’s got plenty of speed. She stayed with my filly until the far turn, but when I called on her she went on. She didn’t change leads tonight probably because she was looking at that outside horse and never really looked down inside her at that other filly (T Rex Express).”

Moonlit Song, a sophomore daughter of Fiber Sonde owned, bred and trained by Tim Grams, has been the dominant member of her division since the spring and capped the year by winning three straight stakes, the last two against older fillies and mares. She finished the season with eight wins from 10 starts and earned just shy of $250,000 and will get a well-deserved vacation.

“She’s going to get some time off now and I probably won’t bring her back until March,” Grams said. “She hasn’t been to the farm in over a year and she’s had a lot of hard races. She’s even better than Fancy Buckles. This filly just has another gear that Fancy Buckles didn’t seem to have. When we bring her back in the spring we’ll start looking for some races for her, but she can come right back for the Sadie Hawkins and the Cavada again next year. She’s something special and Christian rode her with so much confidence that at times I got nervous watching him.”

One race after steering Moonlit Song to the shortest priced victory of the night — she was 3-10 — Hiraldo had the chance to play the spoiler role when he guided Bound to Windsor to a 15-1 upset over the previously unbeaten Noblame (J.D. Acosta) in the $75,000 West Virginia Triple Crown Nutrition Breeders Classic for two-year-old fillies. A juvenile daughter of Windsor Castle owned, bred and trained by James W. Casey, Bound to Windsor rebounded from a fifth-place finish in the $50,000 Rachel’s Turn Stakes here for two-year-old fillies three weeks earlier by handing Noblame her first defeat in four tries and did so in stakes record fashion of 1:19.85 for the 6 1/2-furlongs — more than a second faster than two-year-old boys navigated the distance one race later.

“In her first start she stumbled leaving the gate and then circled the field five wide,” Hiraldo said. “But then in her last start I sent her to the lead along the inside and she didn’t like that and she got tired and that other filly (Noblame) went by her. But I knew this time (Noblame) was the horse to beat, so I just let my filly settle and then I waited until the three-eighths pole to make my move and by the eighth pole I could see that other horse was getting a little tired and my filly just went right by her in the lane.”

Hiraldo also finished second in three other events, taking runner-up honors aboard Binn Goode for Casey in the $75,000 Vincent Moscarelli Memorial for two-year-old colts and geldings, finishing second for Casey aboard Tricky Windsor in the $75,000 West Virginia Division of Tourism for three-year-old fillies, and then was second in the finale for Grams atop Rock n’ Gold in the $80,000 West Virginia Distaff, one-half length behind Romantic Cork for owner-trainer John A. Casey.

“It was definitely a really good night,” Hiraldo said. “I had a lot of good mounts and I was grateful for all the trainers who gave me a chance to ride tonight. Anytime you can win three races on one night you know you’re doing something right and those nights you don’t mind finishing second a few times.”

This story originally appeared on The Racing Biz.